Benchmark everything, trust no one 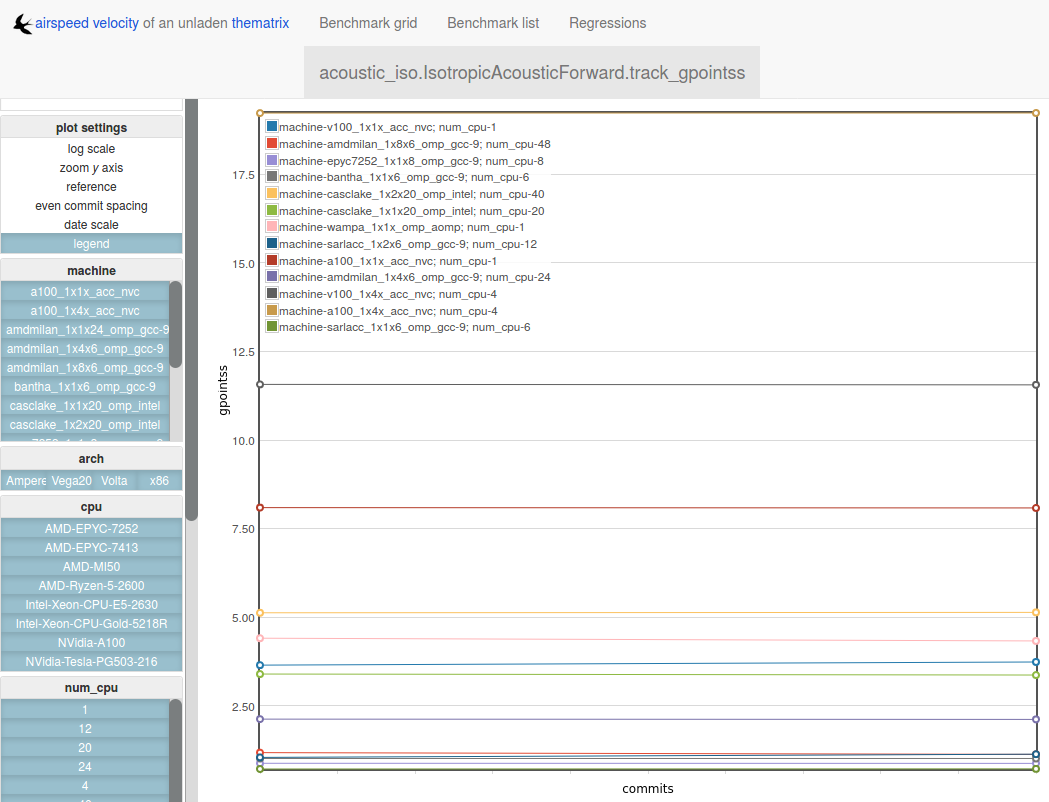 We developed TheMatrix as an automated, cross-platform benchmarking suite for Devito. By the push of a button, utilizing GitHub Actions in tandem with Airspeed Velocity (ASV), Devito’s benchmarking tools, and computing platforms, a spectrum of benchmarks and regression tests can quickly be executed, and compared across a broad range of hardware configurations.

TheMatrix is the most comprehensive apples-to-apples comparison of the performance of seismic imaging workloads yet to be published. You can dive straight into one of the TheMatrix auto-generated plots! This plot shows the performance of the 3D isotropic acoustic equation, a basic benchmark used by the seismic imaging community. Gigapoints per second is used as the performance metric as it is widely used in the O&G sector to estimate the price of data processing. Indeed, thanks to the FLOP reduction technology in Devito, it is often observed that gigapoints per second can be increased while FLOPS decreases!

Use the benchmarks tab at the bottom-left of the page to jump to the many other juicy results.

Devito is a domain-specific language for explicit finite-difference/stencil-based computation on structured grids. At the user level, all Devito operations (e.g. finite-difference stencils, boundary conditions, interpolations, cross-correlation) are expressed symbolically - a layer of abstraction built upon SymPy. This code is jit-compiled into a dynamic C–library for the specific hardware at hand with the compiler of choice (GCC, Clang, ICC, NVCC, PGI).

Devito natively supports a range of architectures, including CPUs (Intel, Power, ARM, AMD) and GPUs (NVidia, AMD). Notably, the user code for any particular simulation is identical for all supported platforms, regardless of the chosen target programming models (e.g., C, OpenMP, OpenMP+MPI, OpenACC+MPI).

TheMatrix has been developed as a tool to quickly and efficiently evaluate the performance portability of Devito across multiple hardware configurations for a range of production-level stencil-based computations. The aims of this software are:

Devito Codes’ objective is to create an ecosystem around the open-source package Devito to maximize productivity, portability, and performance. Our new software, TheMatrix, pushes in this direction by:

While TheMatrix currently runs on our on-prem development cluster, we also support Cloud platforms such as Azure.

Our vision is to build a platform that provides live monitoring of the pricing on different clouds. With comprehensive performance data and Cloud resource pricing, TheMatrix provides the means to optimize cost-of-solution as well as time-to-solution.

The current version, v0.2 is only the beginning. We’re keen to incorporate the feedback that some companies have already provided. For example, we know the visualization needs improvements; we want to make it straightforward to understand what a plot is showing, which involves customizing AVS. We also generate many more detailed performance metrics than what is displayed via ASV.

At the same time, we are exploring with the community how to offer this as a service best. For example, add a REST API so the TheMatrix can be programmatically queried. We are also working on adding new benchmarks and architectures. We also intend to shift to using Docker rather than Conda to set up the runners. This should make it even faster to configure a new architecture and reproduce experiments.

Why don't you read something next?

Devito Cluster - the whys and the whats